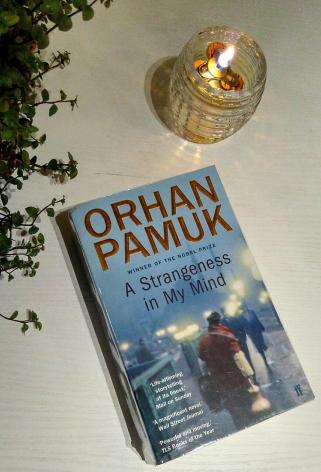 I really need a while to reflect after reading this novel. The love story, family conflict, and overall transformation of a city. In addition to personal life of the characters, Orhan Pamuk has successfully brought various issues through ‘A Strangeness in My Mind’: history, politics, as well as social and development issues (urbanization to be more specific).

This is the first time I read Pamuk’s work (and I am eager to read more of his). The reason I was interested in the book was because the story revolves in Istanbul, one of my favorite cities (that I’ve visited so far). I have to admit that I used to see Istanbul as an outsider who came to the city for a few days and visited those popular touristy destinations. However, this book tells the other side — ups and downs — of the city. Pamuk lets the readers get to know Istanbul through the life of boza seller (boza is a kind of Turkish traditional drink) named Mevlut.

As for me, the more I turn the page, the stronger attachment I feel towards him. Probably, it is understandable for the story spans over more than forty years, from 1968 to 2012. Over that period, there have been quite a transformation in the city. To name some of the changes that affect the characters are the emergence of modernly processed and packaged foods and beverages that hurt the business of street vendors and the massive construction of apartments that requires demolition of old buildings. For those people who have witnessed all the changes throughout decades, it could be hard and devastating to leave behind all the memories they have.

On the romance side of the story, I must say that it is not a common one. Imagine a young man eloped with a girl to whom he’s been sending love letters for three years. But then on the day they were eloping, the young man just realized that apparently it’s not the girl he’s been thinking all this time. But, what to do now? As Pamuk wrote in the novel, ‘the die is cast’. That’s what happened to Mevlut and Rayiha. They ‘accidentally’ committed to each other in a marriage.

The forty years of Mevlut’s life in Istanbul involved many characters with their own complication. One of the most important relations is with his uncle’s family who has been very helpful in some cases but could also put Mevlut in many uneasy situations. During the forty years, some people change, some stay the same. The city has transformed a lot, but something remains in Mevlut’s heart.

Thank you, Orhan Pamuk, for writing this beautiful and reflective piece. :”)

View all posts by Maisya